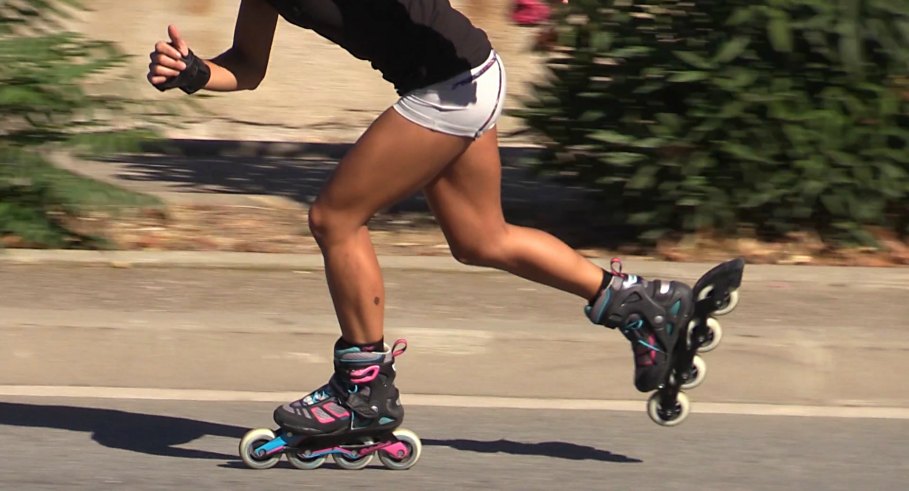 I’m not ashamed to admit when I’m scared — but I’m also typically game to face my fears. I’m terrified of heights, so I jumped off a cliff. I was nervous about my ability to complete a long course triathlon after having some knee issues, so I did a half Ironman. And experiencing some major butterflies about leading a workout in front of a thousand of my newest friends didn’t stop me from doing just that at the Lincoln Center last year.

But, every once in a while, I’m surprised by the fear I feel about something — and, believe it or not, that turned out to be the case when the folks at Rollerblade sent me a pair of their Macroblade 100 skates. (For those who aren’t in the know, the 100 refers to the wheel size — 100 is larger, which means you can go fast, but there’s also the Macroblade 84 and Macroblade 90, both of which are great for the type of training I’m gonna touch on below.)

Let me back up a minute. Or maybe more like a decade … or two. I used to have a pair of Rollerblades and I loved them. In high school, I had a summer job scooping ice cream at a beach and, after work, I’d strap on my skates and take off for a workout with friends without thinking twice. And yes, that led to one pretty good tumble when I took on a steep downhill that I hadn’t properly vetted — but for the most part, I just did a lot of skating and went as fast as I could and it was awesome.

Fast forward to the present day, a few weeks after my 37th birthday, when I assumed I’d pick up where I left off … only to find that I felt way more like this.

My eyes might’ve been bigger than Bambi’s on my first time out, to be honest. I just couldn’t believe how unsteady I felt. I mean, earlier that day I’d been out on a stand up paddleboard — battling wind and some decent waves — and never even came close to falling. I’d done hella balance poses at yoga the day before. And yet, on my skates, it took … well, a while before I would release the deathgrip on my (very patient) husband’s arm and skate the length of the sidewalk solo.

A couple of days later, we headed to a nearby empty (and smooth) parking lot, and boy, did that make a difference. It didn’t take long before I was building speed, practicing turns, and attempting to learn to stop (although I’m still mostly relying on a mix of Jared catching me, skating into the grass and prayer — braking is haaaard).

And that’s really good for a couple of reasons. First off, in Hawaii, I learned from some of the surfers I met that Rollerblading is a really great way to train for surfing — and you know how much I want to be able to actually surf.

But, even better (or, at least, more pertinent to my daily life), it’s also awesome training for running — in fact, Rollerblade has a training program specifically for runners. And it makes sense if you think about it, since inline skating works a lot of the same muscles you’d use for running, but (assuming you don’t flail and fall all over the place) with less impact, so you can skate either as a replacement for, say, a long slow run, or as cross training in addition to your regular runs.

I won’t lie — I’m still building my skill level (not to mention my confidence), so I haven’t incorporated too many drills just yet (unless you count “remain upright and move forward” a drill, which isn’t totally unreasonable). But I’m seriously excited about how much improvement I’m seeing every single time I put my skates on. In just a few more sessions, I think I’ll be working that one-foot swizzle like a boss … and there’s no doubt in my mind that I’ll be mixing in some skating sessions as I get my run on this race season.

When’s the last time you slipped into a pair of Rollerblades? Think you could get right back out there if you did it again today? You might wanna give it a try, because, from what I’m seeing out on the bike trails and boardwalks these days, they are back! —Kristen

Previous: A Note From the Heart
Next: You Can’t Hate Yourself Healthy — Last Chance to Sign Up!