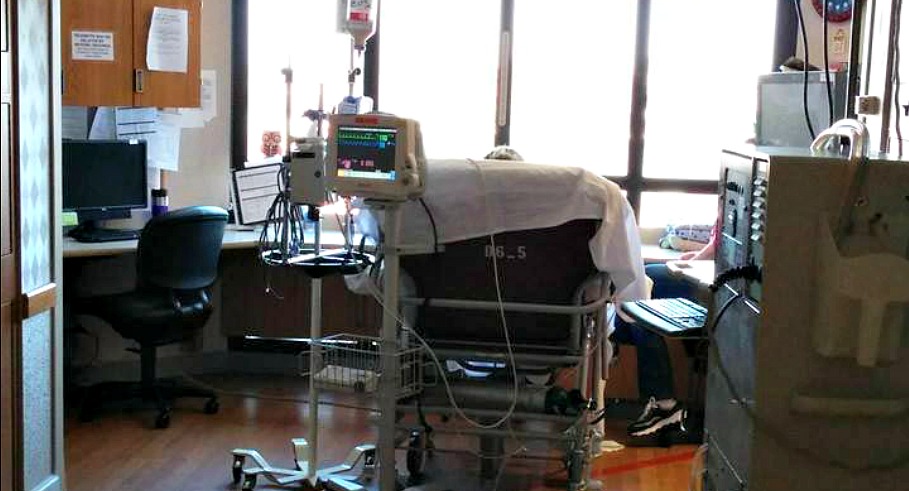 I used to be flippant about getting my flu shot. That was until my good friend (and amazing writer and overall human being) Allison Miller damn near died from it. Allison works in media and public health policy in Washington, D.C. When she’s not whipping up press releases and deciphering wonky acronyms, she occasionally blogs about starting life over in her 30s as one-legged wonder woman in the big city. Allison has a B.A. from the University of Minnesota and is working on her M.A. in expository expletives and inappropriate internal monologues. You can waste time on her blog at This Leg of the Journey. Here’s her story, in her own moving words.

I was recently waiting to deplane a flight when I overheard two fellow passengers’ conversation.

“No, I don’t get the flu shot. It doesn’t do anything anyway.”

I was just about to open my mouth and interject, “The flu almost killed me. But, sure believe your bullshit,” when the two passengers grabbed their bags and headed down the aisle blissfully unaware of how their cavalier attitude about the flu could cost them or someone they love their lives.

But let me back up. After all it’s “just the flu,” right?

That’s what I thought two years ago when what was “just the flu” quickly escalated and my life was forever altered.

I was 33 and otherwise healthy. I didn’t get the flu shot because I somehow missed the memo that the shot was for everyone — not just the sick, elderly or health care workers.

It was while I was at work — jammed into an overheated public hearing room for hours — that I started to feel sick. I figured it was the surroundings combined with a cold and so I dashed off a note, “I feel like death. Heading home.” handed it to my co-worker and left.

Little did I know how apt that note would be.

Before going home I called my primary care clinic. I had a history of chest colds and I wanted to get ahead of this one. I got to the clinic, met with the doctor and was told to go home and rest. Everything sounded fine. If it got worse, he said, come back.

Overnight my throat started to feel like I had swallowed a big gulp’s worth of acid, followed by a gravel chaser. My lungs were wheezy and I felt periodically faint.

The next day I went to urgent care where they gave me two nebulizer treatments, did a chest-x-ray, and without any signs of something more serious, sent me home with a prescription inhaler and some codeine cough syrup.

I downed that syrup. And then I threw it up. I used the inhaler and then passed out.

Eventually I called a friend to take me to the hospital. She arrived, took one look at me and called 9-1-1.

The ambulance ride to the hospital and a few minutes in the emergency room are the last things I remember of the next three weeks.

“Just the flu” had led to bilateral bacterial pneumonia, one of the virus’s most common complications.

What was uncommon is what happened next.

My lungs filled with fluid and collapsed. My immune system, which had been doing a whole lot of nothing for the previous 48 hours, suddenly overreacted sending me into septic shock. My blood pressure plummeted, my heart function dropped to nearly nothing, my kidneys failed. One by one all my organs checked out and it soon looked like I would too.

As a last ditch attempt to save my life, doctors put me on something called Extra Corporeal Membrane Oxygenation (ECMO). It’s essentially a heart/lung bypass machine that does the work of both organs and oxygenates the blood outside the body. I was on this machine for five days, during which time I experienced the second most common side effect of ECMO — limb loss (the first most common being death). ECMO requires around the clock monitoring by a team of highly trained medical specialists.

Even still, because the blood flow and pulse are being artificially sustained, it’s hard to tell if adequate circulation is reaching the extremities until it’s too late. In my case, that meant emergency surgery to amputate my left leg above the knee.

While I survived the surgery, it was unclear if I’d survive in the long-term. Needless to say, it was hell for my family and friends all of whom kept an around-the-clock vigil for weeks, until finally I began to come around.

I spent a month in intensive care and then nearly two more in the hospital on a ventilator, getting dialysis and getting fed through a tube until I was finally, finally well enough to go home.

Of course when I did, I did so with permanent lung and heart damage and a new disability. It would take six months before I healed enough to get a prosthesis and another year to learn walk with it. To this day it’s a constant struggle with fit, function and comfort.

And all this from, “just the flu.”

What people don’t realize is how truly serious the flu is. It kills more than 30,000 people in the U.S. each year — and these aren’t just the elderly or infirm who have other underlying conditions. These are people like me who at 33 hadn’t had the flu in well over a decade. It’s people like 26-year-old Becca Meissner of Minneapolis who didn’t just lose a leg, but lost her life to the flu this spring. It’s thousands of others whose loved ones are left — like mine — battered and devastated by the sudden severity of something as seemingly mundane as the flu.

Of course the flu shot is not perfect. It doesn’t guarantee immunity, but it does lessen the odds you’ll get sick and if you do get sick it lessens the severity and the likelihood of serious complications. What’s more, your improved immunity helps protect those with weakened systems — like the very old, very young or those with other underlying health conditions — so the flu can’t spread.

It takes a few seconds to protect yourself and others. A few seconds.

If I could go back in time, I’d be damn sure to make time for the vaccine. Instead each day I take time to put on my leg, take my medication, be thankful to be alive and to tell others it’s not, “just the flu.”