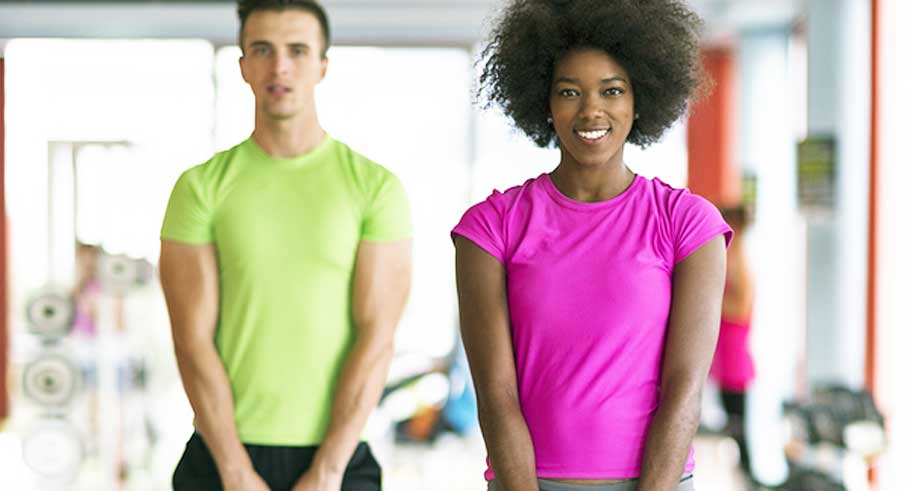 Let me start off by saying that my husband of over four years is an absolute SAINT … like, “How on earth do you put up with me and keep coming back for more?” kind of saint. Growing up on a farm in small town Iowa with four older brothers, I’ve always been pretty independent — you might even say stubborn as hell. But we can’t change our roots, nor would I want to.

Back to Saint Husband (SH, or “Sexy Husband” as he likes to call it). He’s sweet as a peach, but he’ll always give it to you straight (in the kindest way possible of course. Maybe a soft peach?). One of my favorite sayings of his is, “Find a strong woman who makes you better. One with just the right amount of bi*ch … not too much, but just the right amount.” This cracks me up every time, especially coming from him. But in all fairness, he’s right.

I’m no relationship expert and I most certainly do not have a degree in counseling, but I do have firsthand experience — and I’m happy to share why I think working out together is great for our relationship.

The Overall Goal: Challenge One Another

We all want to be pushed, given a reason to be better. No one wants to be with a “yes person,” meaning someone who doesn’t know how to say no and clearly doesn’t have an opinion of their own. In a way, we all want to be challenged. But there’s a good, bad and ugly way of challenging one another.

The Good of Training With Your Spouse

Have fun with each other! I’m fortunate that SH and I both have similar interests. Although, keep in mind that different interests are not a bad thing — it just means you have more options.

Nothing amps me more than high-fiving SH during a race while he gives me the rundown on what to expect (meaning who I need to go catch!). My response is often very vague, as I’m more than likely borderline hyperventilating while he has yet to break a sweat.

In training, he’s faster than I am in most disciplines. How do we work around this so we’re both making the most of our time and training to the best of our ability? We map it out and tag team. If we go out together and one gets ahead, the other will typically hold up for a brief hydration/nutrition break. (Chivalry is not dead, people!)

Running, on the other hand, is a total game changer. It’s very rare to EVER see a race picture of him where both feet aren’t off the ground, while I, on the other hand? Slow and steady wins the race. Some ways we work around this obstacle is by choosing our training venue wisely — the dreaded loops, treadmill or out and backs so we can catch up with each other throughout the run. But sometimes we do our own thing and meet back up at the end, which is totally fine. It’s like “Yeah! We survived — let’s celebrate!”

Other times we’ll serve as each other’s aid stations (especially on long runs). Whoever is not running will bike and hit the runner up at certain mile markers/time points to provide hydration, nutrition, high-fives and if you’re really lucky, a motivational booty dance in spandex.

Don’t think for one second that after more than two years of dating, four years of marriage and a baby on the way, we’re all googly-eyed, spewing teddy bears and rainbows. This is real life! SH isn’t very capable of arguing, but I sure am. Just call me an onion with many layers. You know the kind that will make you laugh, cry and sometimes even run in the opposite direction? Let me provide you with some evidence.

Me, going into the water before SH during a race, and coming out first. Any guesses on what I’m squawking about? 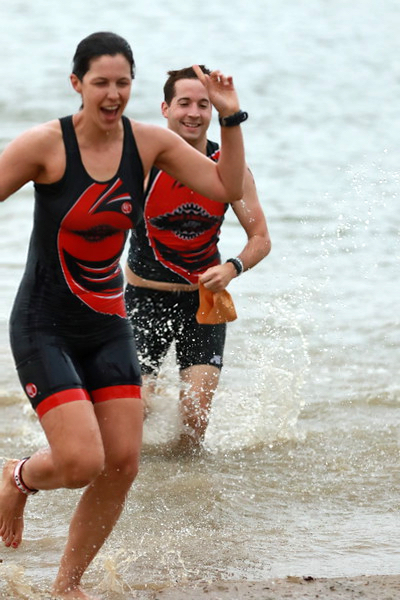 Yep, that’s me taunting SH after whipping him on the bike in a triathlon. (Yes, seconds in married life counts as a whooping!)

The Bad of Training With Your Spouse

Where it tends to go sour is if you’re the type that will drag it out, lack encouragement and constantly mock your better half. There’s a big difference between being playful and degrading someone. Know that difference as it applies to so much more in life than just relationships.

The Ugly of Training With Your Spouse

Okay, where it really turns ugly is when your activities drive a wedge between you. Maybe you stepped over that playful line and it took a turn for the worse, or maybe you’re constantly training on your terms and not considering the other person. (This is particularly common if you have kids.) Maybe you’re just doing your own thing so much that you’re growing apart.

The most important thing is to be aware and identify these common problems. As with training and racing, relationships require work. Putting in the time and effort typically reflects in your performance. So be good to one another, take each other into consideration, grow together, make an effort and most importantly LOVE.

Have you trained with your partner? What was your experience? —Nichole